There are two types of FADs used in fisheries:

CONSTRUCTION
Fishermen make anchored FADS from bamboo or trunks, leaves and ropes plus a strong anchor line with a stone or a concrete block on the bottom of the sea. A human-made drifting FAD is often a construction from bamboo, ropes and old webbing from fishing nets, which remains at the surface. Most used is rectangular shaped, with a size 3 x 1,5 m., but this may vary per tuna purse seiner.

A large part of the Spanish fleet is using steel rings, with new jerry cans as floaters between plastic covers. This type of construction is polluting the sea but serves them as they can last very long and therefore remain active as a FAD for a long time. Beneath the FAD hangs a rope or net, depending on the ocean and area, 60-80 meters in length. The problem with using the net instead of a rope is that turtles, but also other sea animals or fish, might get entangled in the net and die. 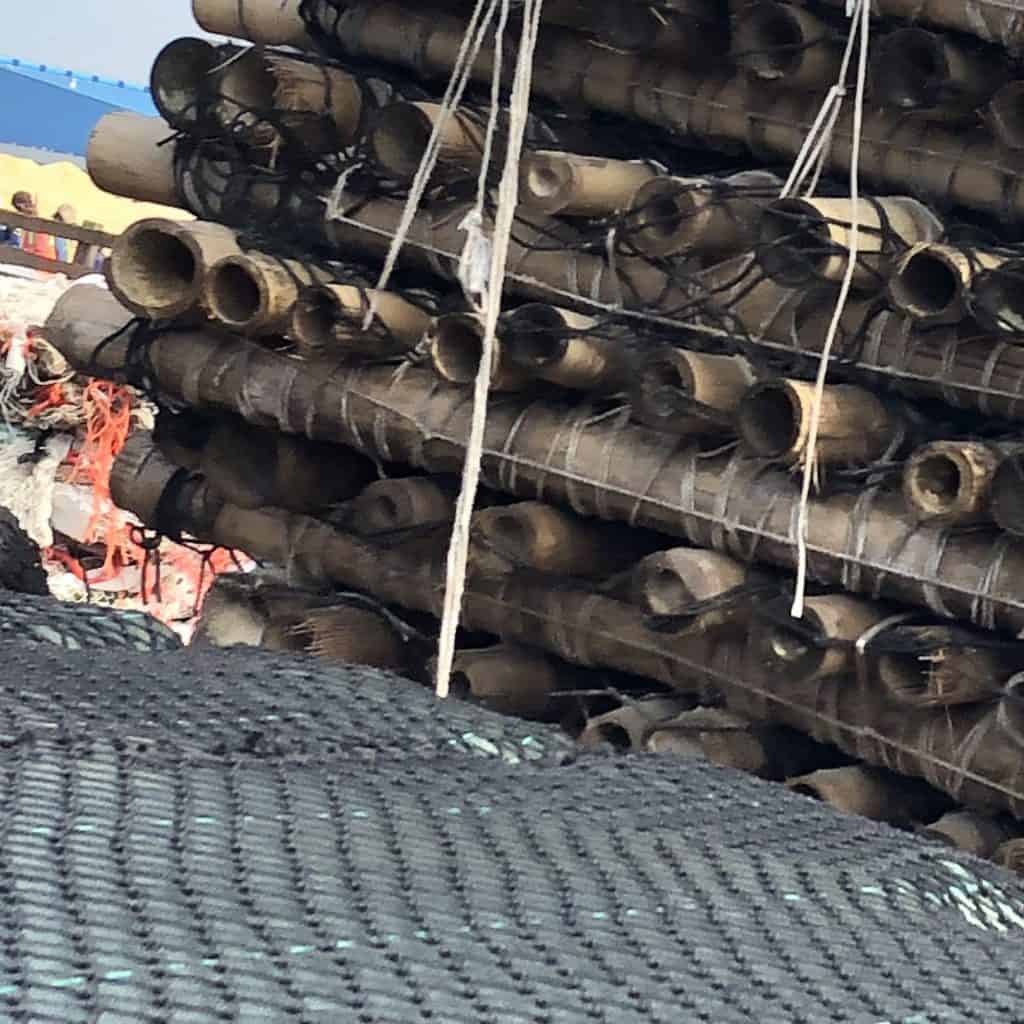 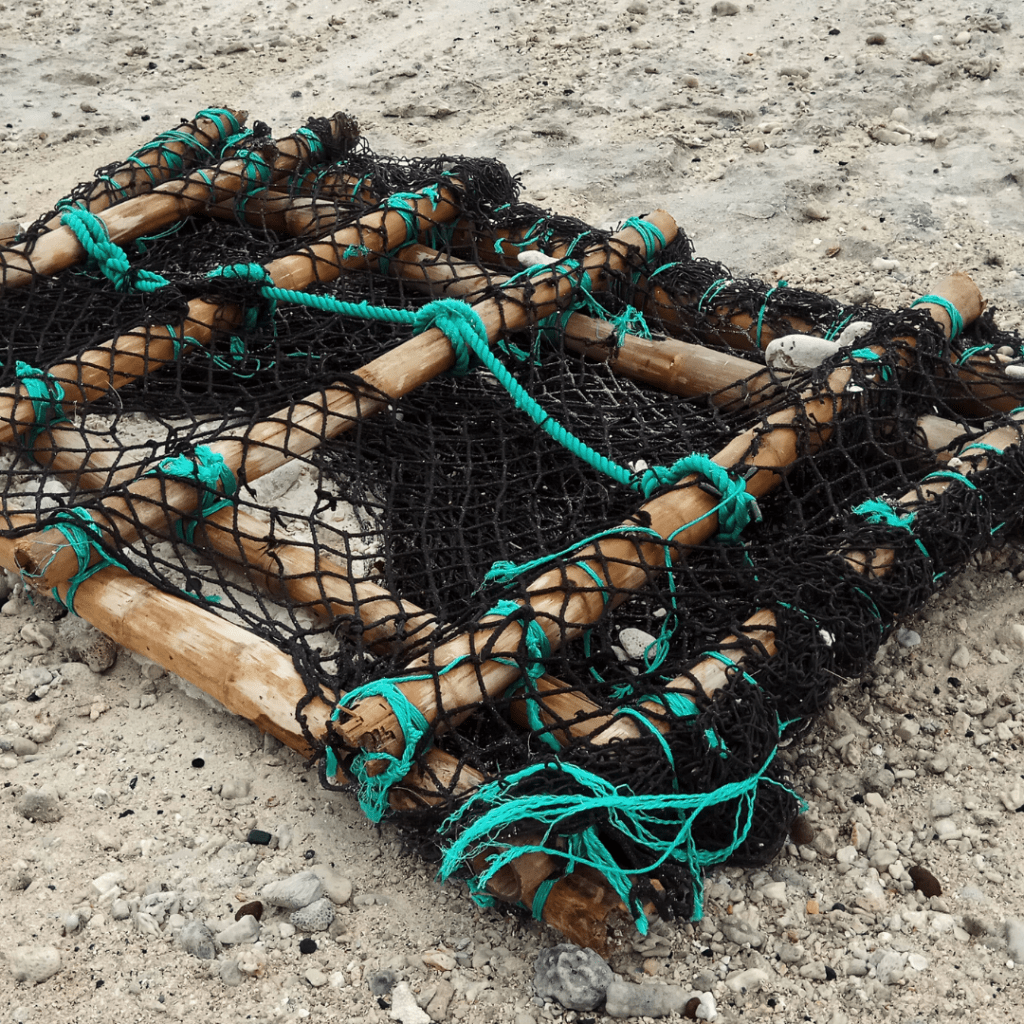 USE
Anchored FADs are used in coastal fisheries and mainly used by local fishermen to attract not only tuna but all kinds of fish. Some tuna purse seiners make also use of in the coastal waters of Indonesia and the Philippines. Drifting FADs are used by tuna purse seiners and pole & line vessels as they go further of the coast to search for large schools of tuna. It is easy to trace the human-made FADS,  as the owners equipped them with GPS-beacons. Via a satellite receiver the vessel knows where to look for FADs. The latest generation buoys also have small echo sounders, which gives an estimate of the quantity of fish under the FADs.

The principle of a FAD is that fish has a fascination for floating objects, as it considered a mark for them. The reaction on a bunch of seaweed, trunk or anything considerable in size is the same. Small fish is meeting, and on the other side, the juveniles seek protection against their predators. The juveniles stay around the FAD in a radius of about 50 meters. The bigger tuna remains at a distance of up to 150 meters. The size composition of tuna varies just like the tuna species, but a significant part of the catch is immature Bigeye and Yellowfin Tuna.

RFMO’s do not share regulations, even definitions are not aligned. However, there is now a tendency growing, to at least, align definitions. Each RFMO has its regulations on the number of FADs. In each ocean, there is an activity to try to develop bio-degradable FAD’s, where the affordable rope to keep the construction together, seems to be the most complicated to find/develop.

There is progress in reducing the number of FADs. Herewith a table with the regulation as applicable for 2020: 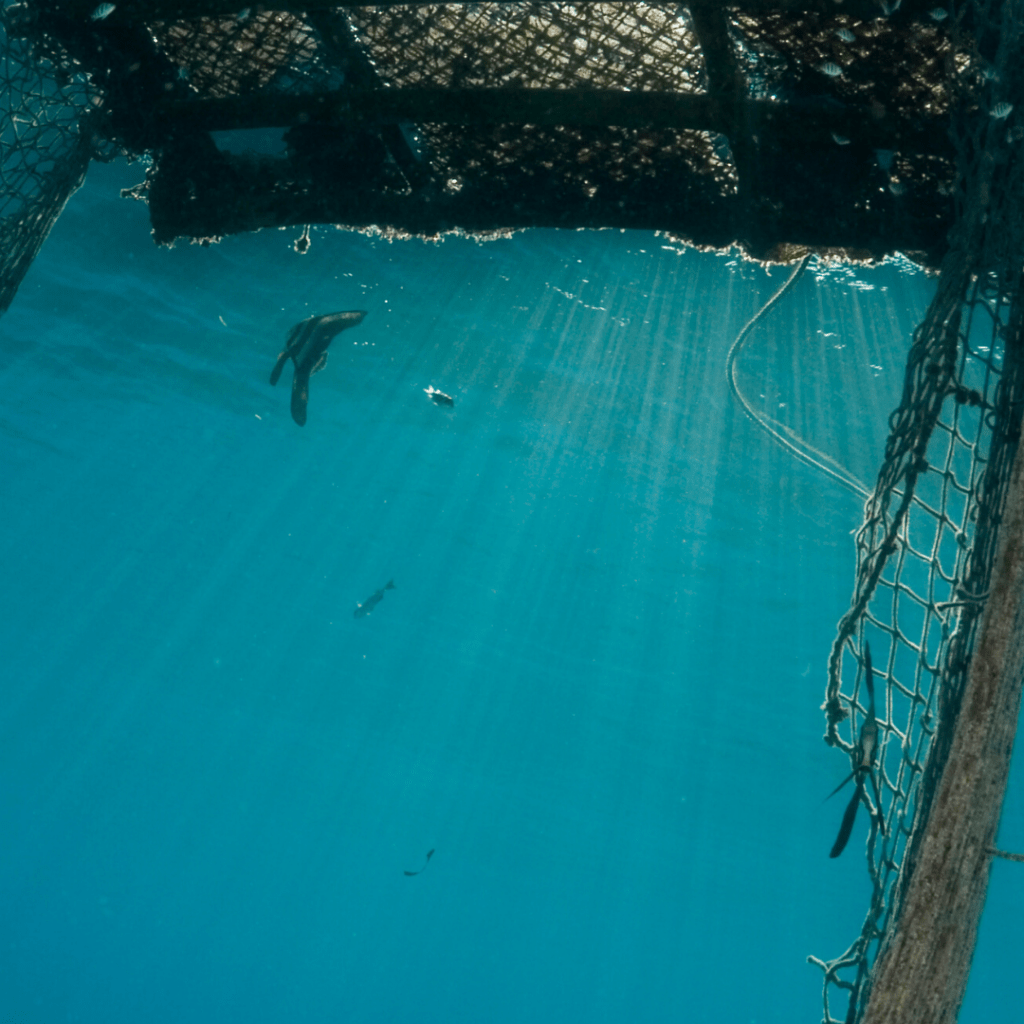 There was a period in WCPFC, during which the number of FAD sets was limited, but it was too complicated to monitor. All of RFMO’s use now:

Nevertheless, catches are still increasing, so there must come additional capacity limitation.

Supply vessels are often old fishing vessels or custom-built vessels. In both cases, they have no fishing gear onboard, but they have fish detecting equipment, sonars, echo sounders, bird detecting and tracking radars. They also have access to buoys software (to monitor the position of FAD’s and the biomass underneath). This equipment, plus good speed and sufficient deck space, are the essential requirements for a suitable supply vessel. The ability to take many prefab FADs on board as well to prepare FADs on board requires which means sufficient deck space. 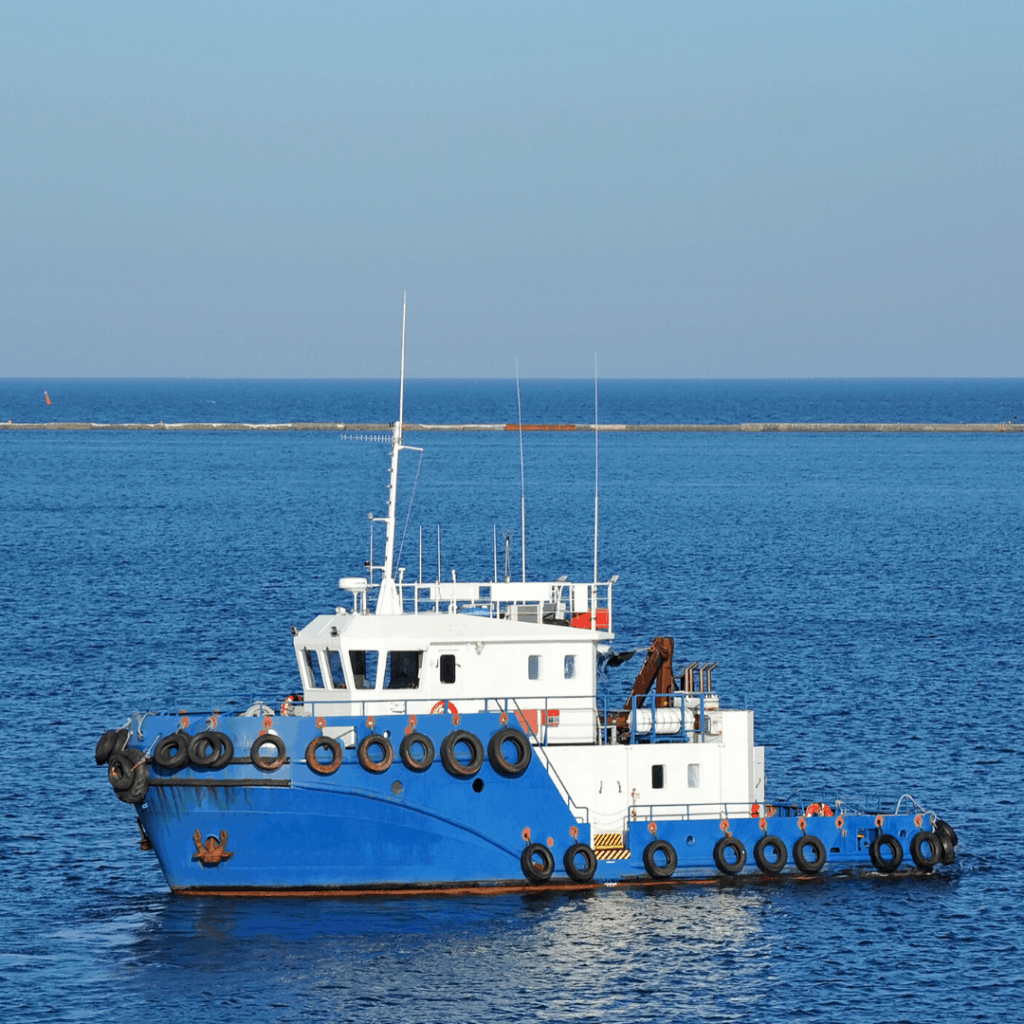 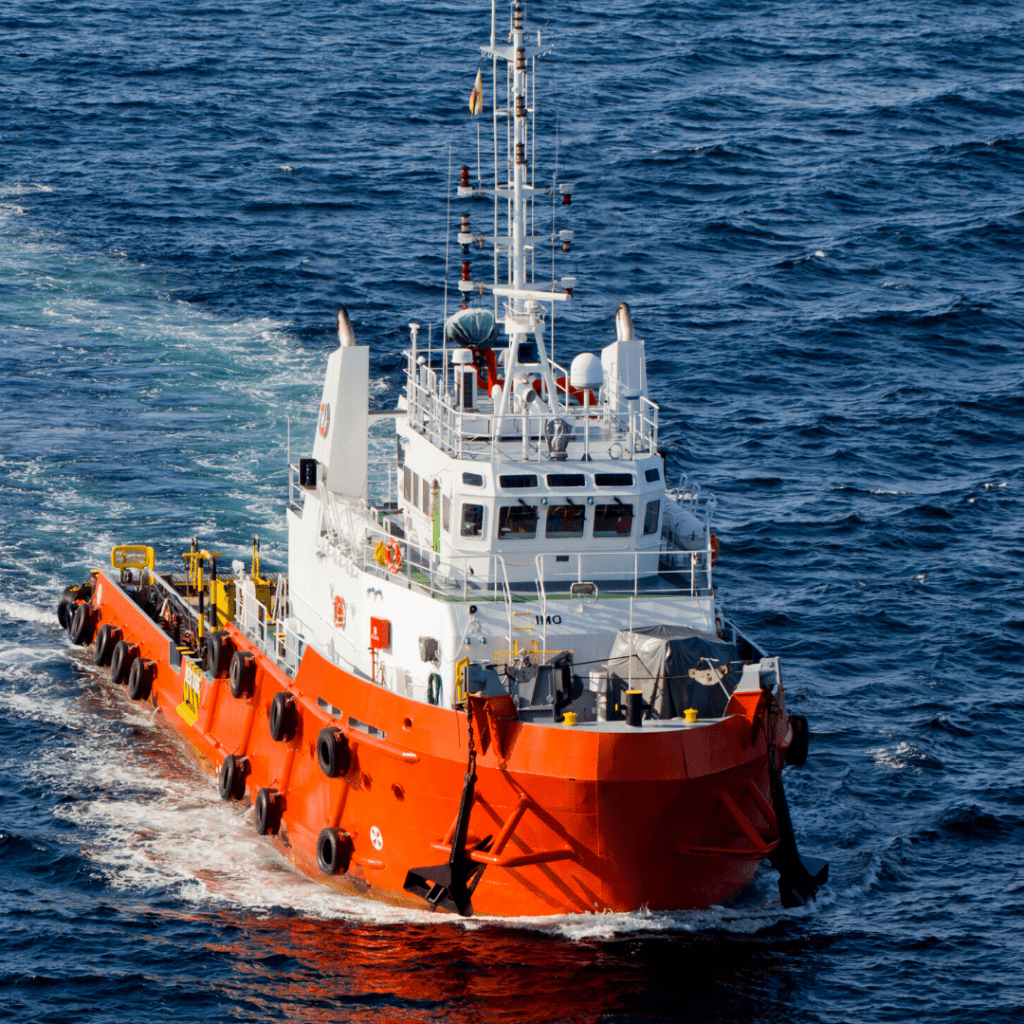 To compensate the cost of a supply vessel, the tuna purse seiner must be able to catch at least 3.000 ton extra. With the help of two supply vessels each, the large Spanish owned vessels have caught more than 18.000 ton of tuna in one year.

Nearly all RFMOs apply regulations or even restrictions on the use of Supply Vessels. The exception is ICCAT, which result in:

The number of supply vessels per ocean:

a helicopter, but nothing compared to the cost of operating a supply vessel. It’s also less effective, as helicopters serve the purpose of finding schools of tuna, which swim on the surface. They’re also used to choose between different schools if they find more then one at the same time. It is expensive to operate the helicopter can not set nor retrieve FADs. On the other hand, a helicopter has a radius of Not every tuna purse seiner is suitable and or equipped to carry a helicopter.

Helicopters are not allowed in the Indian Ocean, not used in the Atlantic Ocean, but in the Pacific Ocean, they use on them nearly every tuna purse seiner.

In the Pacific Ocean, they also use spotter planes instead of helicopters. The spotter lanes operate from shore and work for different vessels of the same fleet.

It is difficult to quantify the extra catch caused by only the use of a helicopter, as more factors are significant. Estimates vary from 2.000 to 5.000 ton per year (mainly Skipjack). 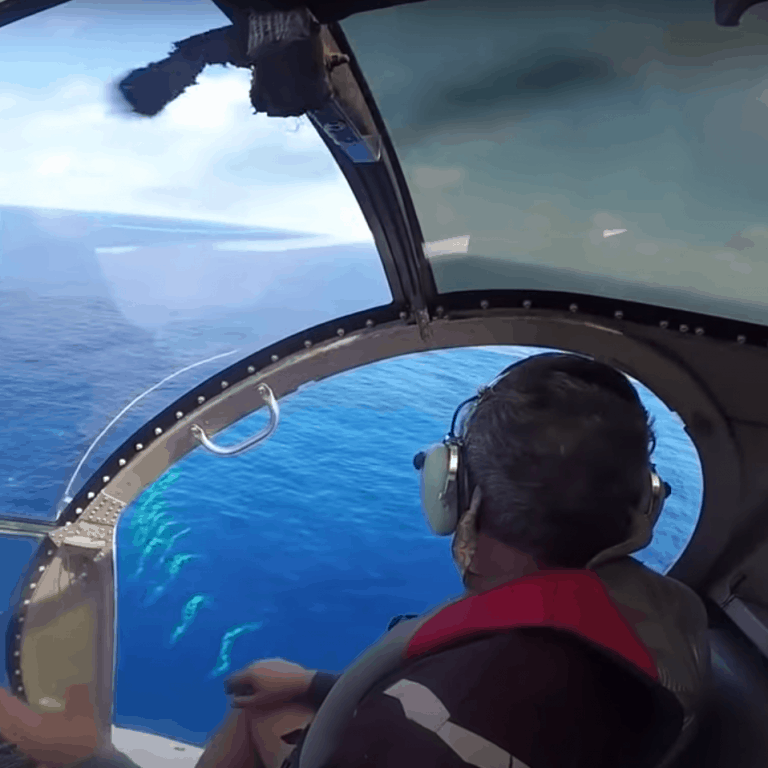 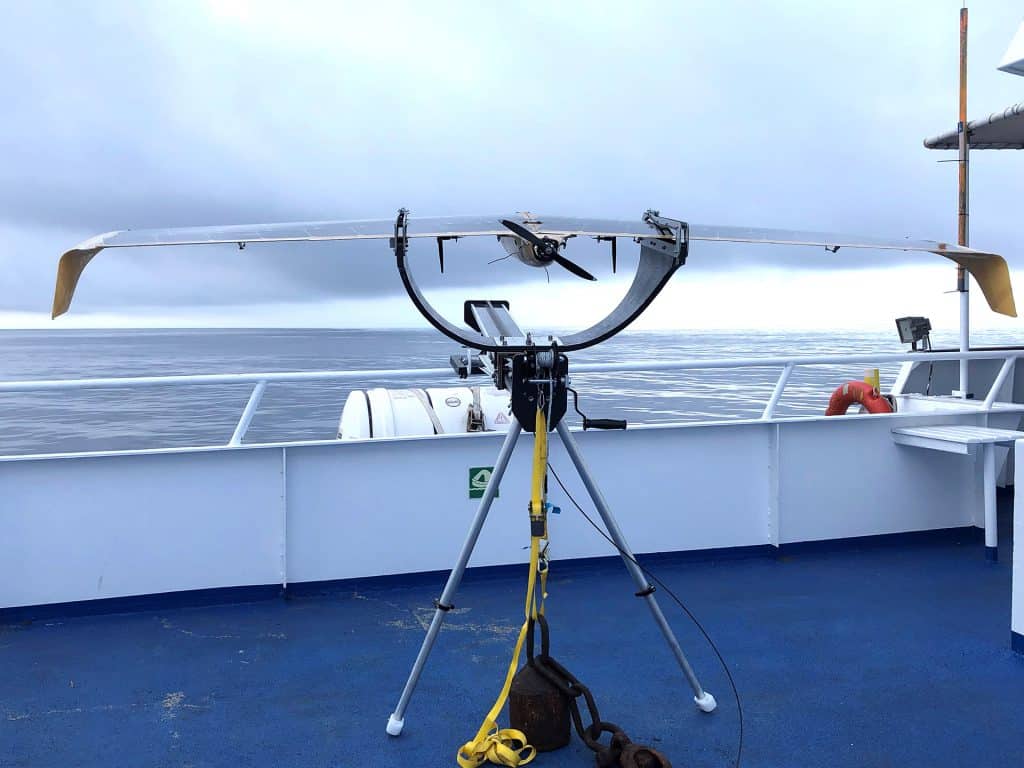 The technical developments of drones and their cameras make it possible to use them instead of helicopters. Their operation costs are low, often driven on solar energy, as the crew can launch and receive the drone by themselves with simple equipment. Drones are light, easy to store and not expensive. The drones operate on visual contact with tuna, so they work like helicopters but at a lower speed and altitude. The disadvantage is their radius, which is limited to the horizon (as they’re radio-controlled).

Where helicopters are also forbidden drones are forbidden. Maybe this will change in the future for drones, in connection with limiting fishing effort. The increase in fishing effort by the use of a drone needs compensation. There is a positive environmental impact on the use of drones. Fishing vessels burn less fuel if they can search less, as the drone is checking indications of the presence of tuna. It is possible to operate even with two or three drones from one ship at the same time. The experience with the use of drones is still limited. It is not possible to give an estimate for the extra catch due to the use of a drone.  As the drones will remain in the same area as the vessel, the additional catch will possibly remain limited to 1.500 – 2.000 ton per vessel per year.

Fishing vessels are obliged to use navigation radars, but tuna purse seiners have powerful radars that can spot birds over 20 miles. Birds go well with schools of tuna fish, and with special software, it possible to track their behaviour. Depending on the behaviour of the birds, captains can decide to direct their vessels to that area. In these cases, the uses of a drone can be very useful to avoid spending fuel. 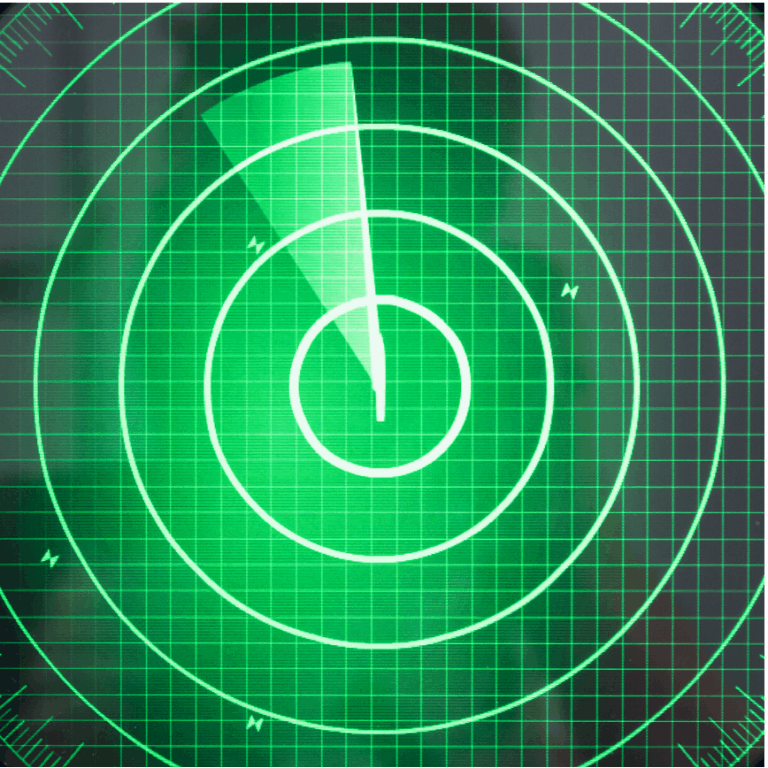 The help out of space is not recent, but not all the tuna fishing vessels have a satellite connection. The installations and the use of data become cheaper every year. The stream of information coming to the vessels is tremendous, like actual and predicted weather forecasts, wave heights, currents,  seawater temperatures, plankton situation. A captain needs to make his own decision based on all this intel, combined with the info from his FAD’s and discussions with his colleages.

The satellite coverage is increasing every year, as companies continuously launch more and better satellites. The quality of the information increases year by year and also the software of modelling predictions are improving with the time.

On every tuna purse seiners you have at least six tuna spotters on the look-out for tuna during the day. The spotters work the areas with their high powered binoculars, searching for birds, signs of tuna or FAD’s. Their input is valuable and will remain as long as the technical solutions are not perfect. 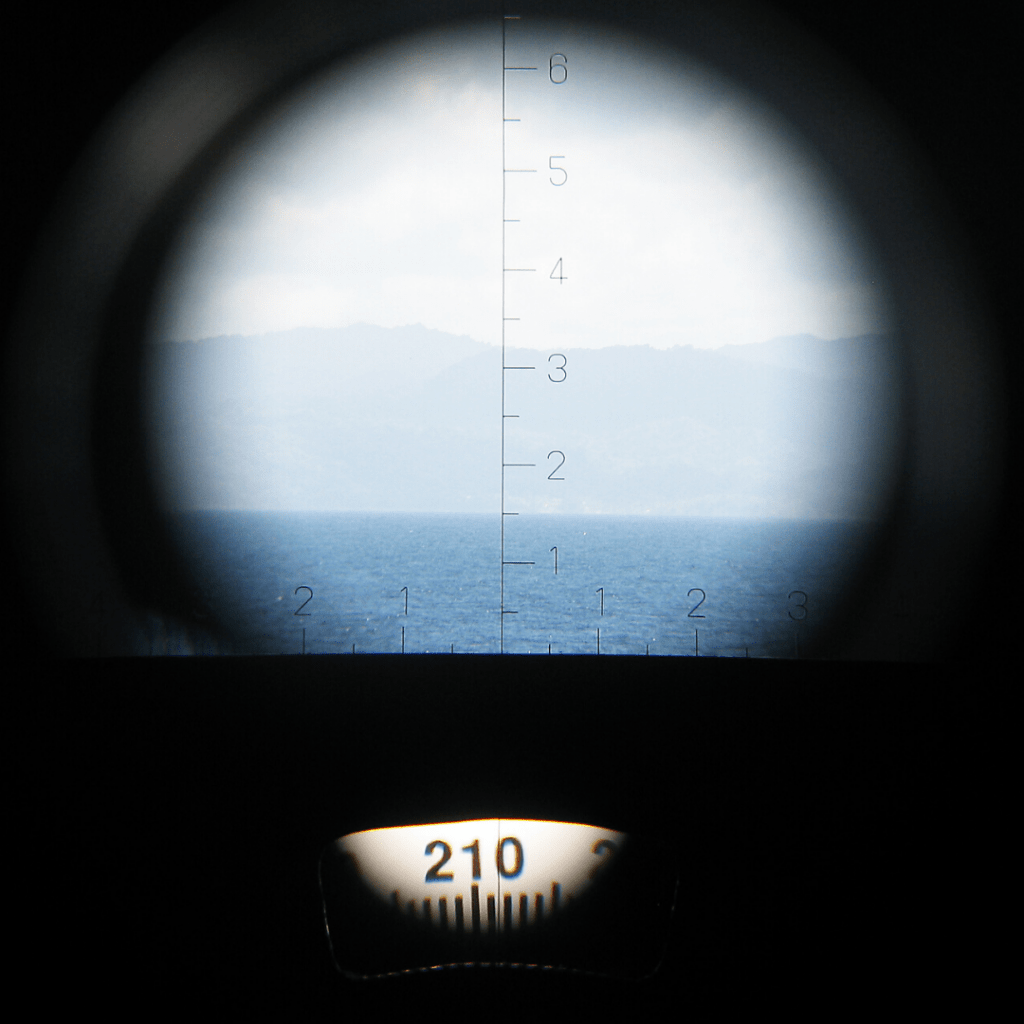 No capacity limit for any kind of tuna vessel

Organisations who claim to limit capacity have shown the contrary. The actual capacity is increasing. They claim that coastal states have rights to build up their own tuna fishing sector. Which is right, but DWF-owners move their vessels around from nation to nation, but they keep the ownership.

Longline and pole&line fleets are shrinking, due to high costs and low prices

The catch by the tuna purse seine fleet is already 66% of the total tuna catch and they grow much faster than the longline and pole&fleet shrink.